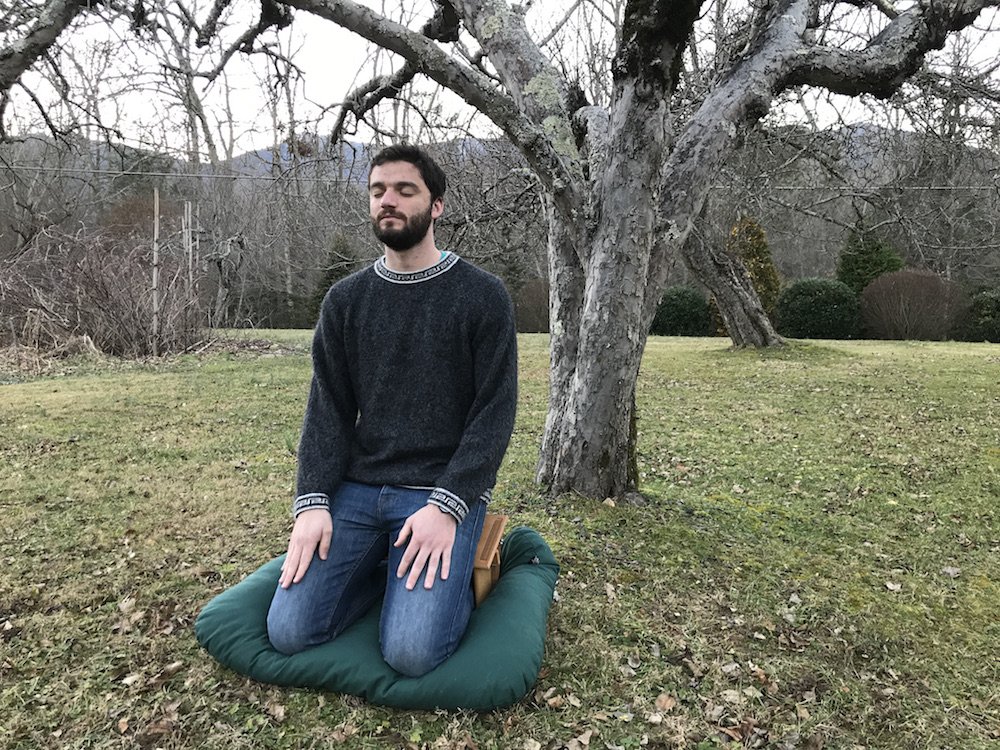 In high school I was often bored and lonely, but I kept myself motivated with the hope that life after graduation would be better. I longed for an environment where I could be intellectually challenged and find a strong supportive community. When I got to college, I gradually realized that I was probably not going to find the environment I craved there. I slowly became more and more depressed.

Late in my freshman year, the news-anchor Dan Harris came to our small college’s campus, to promote his book 10% Happier, which advocated introducing meditation into your daily routine. I was impressed, and from time to time would attempt to meditate for 5 minutes or so, but didn’t keep up with it because I found it so difficult to keep my mind from wandering. The following school year, I became even more unhappy and I ultimately decided to take time off from college and then later decided to switch colleges. At first, I wasn’t any happier at my new college and a therapist mentioned that maybe I should try meditation. A few friends of mine studied abroad in India and Nepal and they become very intrigued about Buddhist philosophy and meditation. Fortunately, my depression eventually subsided on its own, but my interest in meditation remained.

I wanted to learn how to meditate, and even bought The Experience of Insight by Joseph Goldstein, but still never managed to get started on a consistent routine. Some of my favorite podcasts put out episodes extolling the benefits of daily Buddhist meditation and taking extended meditation retreats. I still never was able to set aside daily time for meditation. So when my housemate my senior year of college mentioned that she had taken a free 10 day course. I promised myself that I would try it someday.  Eventually, six months after graduating college, I found the time to register for a course on dhamma.org. I was on the waiting list and received an email just days before the course was set to begin that I had been accepted off the waiting list. I accepted the, and a couple days later I packed up my car and drove the 7 hours to the nearest center in Southeast Georgia. I was armed with my zafu cushion, and a zabuton and peace bench lent to me by my generous neighbor who worked at Carolina Morning, but I didn’t really know how to even use them. I went into the course knowing almost nothing. I came to learn that the promise of Vipassana meditation (at least as taught by S. N. Goenka, the man who founded the worldwide network of Vipassana meditation courses given free of charge) is that with hard work and dedication, anyone can liberate themselves from the miseries and dissatisfactions of life. The teaching dictates that misery and dissatisfaction stems from either craving things or having aversion towards things. Cravings and aversions stem from ignorance: everything is always changing and shifting. Any pleasant sensation or feeling that we crave will go away in time as will any unpleasant sensation that we dislike will do the same. If one can learn to accept and observe the ever-changing nature of reality with equanimity, then one has liberated oneself from the misery of unfulfilled cravings or the unpleasantness of manifested aversions. Vipassana meditation essentially consists of continuously scanning one’s body, observing the sensations without reacting.  One must observe an itch without scratching, observe soreness in the knees and keep them crossed, all the while merely observing and not wishing for the sensations to go away. Remembering that all sensations, good or bad, are impermanent and will come and go on their own.

As maybe you can imagine (or perhaps you know already), practicing Vipassana meditation is very difficult. For the first 3 or 4 days, we practiced Anapana meditation (observing the breath) in order to sharpen our focus in preparation for Vipassana. My main challenge, even after the days of practice with Anapana, was that my mind would wander into daydreams and I would cease doing the body-scans. Other times I became frustrated or even angry that I could not observe sensations on multiple parts of the body at once. Our days essentially consisted of meditation all day with some longer breaks to eat, rest, and walk and shorter breaks between meditation sits to stretch and use the bathroom. In the evening we would watch a video recording of a lecture of Goenka’s in which he would explain the theory behind the meditation techniques we were practicing. Each day the meditation technique would get slightly more complex and so would the accompanying theory.

In order to facilitate the environment where it is possible to practice the technique for 10-12 hours a day, the 60 students were expected to maintain “noble silence.” Starting on the first evening of the course until the final full day of the course, my classmates and I refrained from all verbal and nonverbal communication except for with the teacher and the course manager. The silence and other restrictions (which include no use of electronics, books, or eating snacks outside of mealtimes) help one not get distracted on the task at hand: the sharpening and purification of the mind.

I admit at times I longed for the days to move more quickly and for the course to end. I craved snacks. I wondered what was going on in the news. I worried I would miss an important email. It was impossible for me to maintain focus on the meditation practice for 12 hours each day. Sometimes, during an hour long sit, my mind wandered for 50 of those minutes, remembering places I had been and people I had met in the past few years. Sometimes my knees got stiff.  Sometimes I craved a chicken dinner or even a Google search. I just wanted the retreat to be over. I admit I rarely floss my teeth, but I flossed every day at the retreat because I wanted something more to do.

Other times I was focused. My mind only wandered for 10 minutes spaced out over an hour. I was able to observe sensations without wishing for them to stay or go. Part of the practice is learning not to get frustrated when you can’t maintain focus and not being happy when you can maintain focus. The objective is to merely observe what is going on without reacting.

Finally, on the last day, we were allowed to speak with the other students. It was a relief to be able to speak to the people I had been very physically close to for over a week but never even made eye contact with and in some cases, never heard their voice. It was amazing how different everyone’s experience had been. I thought I had had intense feelings at times, but compared to the anguish and fear some others mentioned they had felt at times, I realized that perhaps I had had an easy time of it. Everyone seemed in a very good mood on the last day, and ultimately I was a little sad to go just as I was making friends with the fellow students.

I learned a lot. I learned how difficult it is to control the mind. I learned that purifying the mind and reaching inner peace is a lifelong endeavor. And I learned that what kind of meditation cushions you use are super important. In order to sit still for an hour, you need some comfortable cushions! I especially liked the combination of the Carolina Morning Peace Bench with the Zabuton sitting mat. The sitting mats in the meditation hall were much thinner than my Zabuton was, but unfortunately the Zabuton would take up too much space to use in the hall, so I left it in my room to use when we were allowed meditate in there.

It had been more challenging than I expected, but I am so grateful that I was able to attend the course.